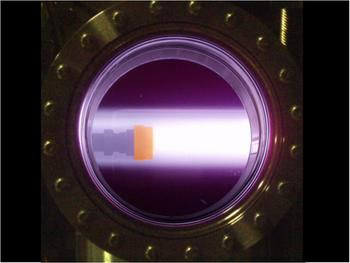 Southern Californians are all about the sun...and so are a group of Jacobs School of Engineering researchers who are working to bring the sun's fusion processes back to earth. The goal is to provide a much-needed renewable energy to southern California and beyond.

At the heart of the sun, fusion takes place at a temperature of 15 million degrees. Since it's impossible to reproduce these conditions on Earth, terrestrial fusion reactors must operate at lower pressures and higher temperatures -- at about 100 million degrees. The best way to control the plasma is to “bottle” it, enclosing the electrically charged gas in powerful magnetic fields. So far, the most successful magnetic “bottle” is a doughnut-shaped device called a tokamak, where a helical magnetic field is used to confine the plasma.

A team of researchers from UC San Diego, MIT and UC Berkeley recently received a $7 million research grant from the U.S. Department of Energy (DOE) for fundamental multiscale studies of plasma-material interactions.

Russ Doerner is a research scientist in the UCSD’s Jacobs School of Engineering’s Center for Energy Research and co-PI on the DOE contract. “There’s no deep understanding of this interaction between the plasma and its ‘wall’ and the other materials in a confined environment. If you can build these ‘walls’, or layers, to be more effective it will save time, money and energy in the long run.”