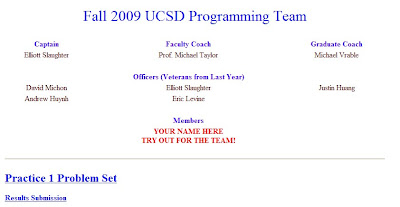 On October 17, 2009, UCSD students competed head-to-head during the Fall 2009 UCSD Programming Contest, pumping out code over the course of five hours.

The following are the top finishers:

The top students will go on to compete in the ACM Southern California
Regionals on November 7.

More details, and photos, are available at http://cseweb.ucsd.edu/groups/UCSDProgramContest/fa09/results/.
Posted by Daniel at 1:56 PM