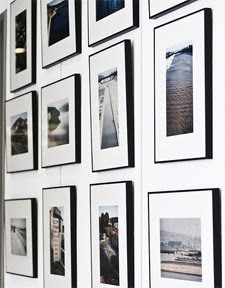 Lea Rudee—the founding dean of the UC San Diego Jacobs School of Engineering—is an accomplished photographer whose work Tijuana River is part of a seven-artist show focused on hot-button issues tied to the border dividing San Diego and Tijuana.

Tijuana River documents the river’s meandering path across the border and its many roles as drainage creek, city water supply, border crossing obstacle, and preserved salt marsh. “In less than 100 miles, the Tijuana River has many identities,” said Rudee in an interview with Calit2’s Doug Ramsey. (Read the full Calit2 press release here.)

“Tijuana/San Diego: Cooperation and Confrontation at the Interface” opens officially on Oct. 15 in the gallery@calit2 on the first floor of Atkinson Hall on the University of California, San Diego campus. The gallery is part of the UC San Diego division of the California Institute for Telecommunications and Information Technology (Calit2).

Rudee noted that on the U.S. side, most of the water becomes part of San Diego’s water supply. “On the Mexican side, some of the water serves Tijuana, but occasional floods produce damage to downstream development, causing resentment by the local inhabitants.” It took Rudee over four years to document on film every stretch of the Tijuana River.

Rudee is a professor emeritus in the Department of Electrical and Computer Engineering and former trustee and president of San Diego’s Museum of Photographic Arts.