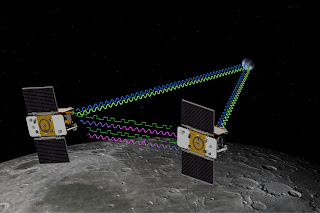 Two spacecraft equipped with cameras to be operated by UC San Diego students, many of them from the Jacobs School of Engineering, are now in orbit around the moon. They were launched in September.
The Gravity Recovery and Interior Laboratory (GRAIL) mission will measure the gravity of the Earth's satellite in unprecedented detail, according to NASA. It also will answer questions about the moon's internal structure.
Also on board the two spacecraft are cameras that will allow middle school classrooms to request pictures of the surface of the moon. The requests will come to a mission command center at UC San Diego, operated by undergraduate students, many of them engineering majors. The students will communicate with NASA's mission control and make sure the cameras take the requested pictures. The mission will being in March of this year and last until May.

The MoonKAM project is led by Sally Ride Science, in collaboration with undergraduates at UC San Diego.
Find out more about MoonKAM here.

Then read recent news coverage of the mission in the San Diego U-T and on KPBS.
Posted by Ioana Buibas at 3:15 PM