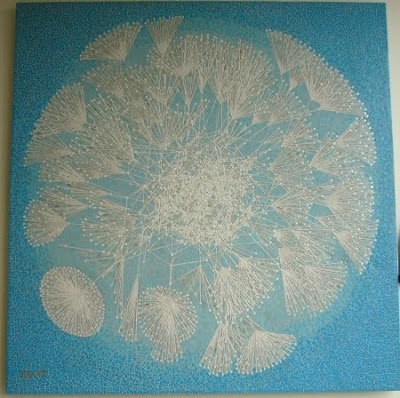 The big idea: What looks like the head of a digital dandelion is a map of the Internet generated by new algorithms from computer scientists at UC San Diego. This map features Internet nodes – the red dots – and linkages – the green lines. But it is no ordinary map. It is a (mostly) randomly generated graph that retains the essential characteristics of a specific corner of the Internet but doubles the number of nodes.

Now, the digital dandelions have been set in stone...literally. The Computer Science Department at University College London liked the depictions of Internet topology and their resemblance to “digital dandelions” so much that they commissioned artist Hannah Griffiths to create a mosaic based on these depictions and have it on display in their new building.

The Department Head of CS at UCL, Anthony Finkelstein, forwarded the images to AminVahdat, the computer science professor at UC San Diego who led the research. Vahdat posted the images on his "Idle Process" blog. One of the images is above...but check out Idle Process for the rest.

The authors on the 2007 SIGCOMM paper about the digital dandelions are: Priya Mahadevan, Calvin Hubble and Amin Vahdat from UCSD’s Department of Computer Science and Engineering; and Bradley Huffaker and Dimitri Krioukov from CAIDA, the Cooperative Association for Internet Data Analysis which is based at the University of California’s San Diego Supercomputer Center.

One of the images from the original UC San Diego press release, and a quote from the first author, are below.

Defending against denial of service attacks and large-scale worm outbreaks depends on network topology. Our work allows computer scientists to experiment with a range of random graphs that match Internet characteristics. This work is also useful for determining the sensitivity of particular techniques – like routing protocols and congestion controls – to network topology and to variations in network topology,” said Priya Mahadevan, the first author on the SIGCOMM 2007 paper. Mahadevan completed her computer science Ph.D. at UCSD’s Jacobs School of Engineering in 2007 and joined Hewlett Packard Laboratories in Palo Alto, CA.