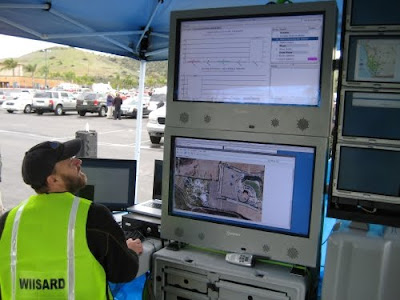 Computer science professor William Griswold is helping to lead a UC San Diego project to find better ways for emergency officials and first responders to talk to each other and share data on the ground at the scene of a natural or man-made disaster – even when the local communications infrastructure is out of commission.

“As the aftermath of the earthquake in Haiti has demonstrated so starkly, communication is a critical ingredient in any medical response to a disaster,” said William Griswold, principal investigator on the WIISARD SAGE project and a professor in the Computer Science and Engineering department of UCSD’s Jacobs School of Engineering. “A critical issue for disaster response is group or collaborative computing in mobile environments. With this new project, we hope to overcome several inter-related problems that inhibit the successful use of information technologies at disaster sites to manage medical care.” (Griswold is also leading CitiSense, the Jacobs School project to create a pollution monitoring network that relies on cell phones and small environmental sensors that people wear.)
Read the full story from Calit2's Doug Ramsey here.
Approximately $1.5 million annually over two years in “stimulus” funding under the American Recovery and Reinvestment Act (ARRA) from the National Library of Medicine (NLM) will underwrite the WIISARD SAGE project. NLM is one of the National Institutes of Health (NIH).
Posted by Daniel at 10:20 AM