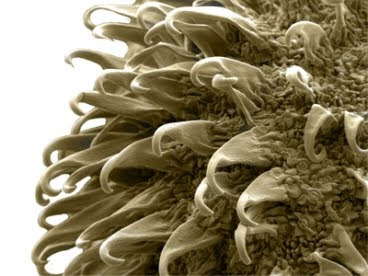 Liangfang Zhang, the second author on the "nanoburr" paper in last week's PNAS that has received alot of attention is now a professor in the Department of NanoEngineering at the Jacobs School.

CAMBRIDGE, Mass. — Researchers at MIT and Harvard Medical School have built targeted nanoparticles that can cling to artery walls and slowly release medicine, an advance that potentially provides an alternative to drug-releasing stents in some patients with cardiovascular disease.

The particles, dubbed “nanoburrs” because they are coated with tiny protein fragments that allow them to stick to target proteins, can be designed to release their drug payload over several days. They are one of the first such targeted particles that can precisely home in on damaged vascular tissue, says Omid Farokhzad, associate professor at Harvard Medical School and an author of a paper describing the nanoparticles in the Jan. 18 issue of the Proceedings of the National Academy of Sciences.

Email ThisBlogThis!Share to TwitterShare to FacebookShare to Pinterest
Labels: NanoEngineering