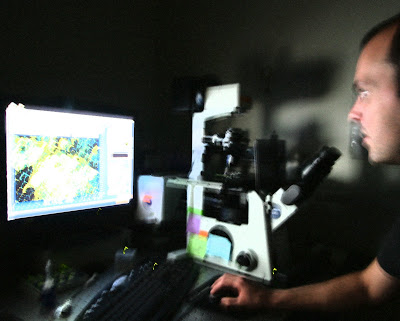 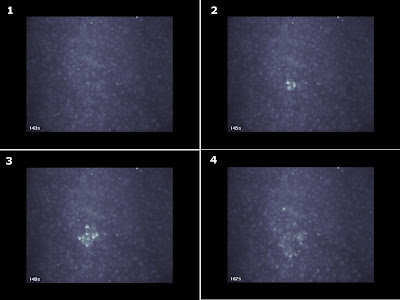 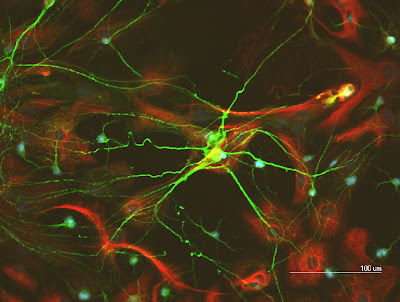 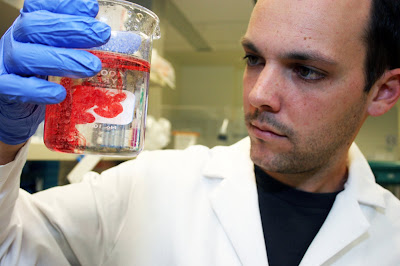 Catching waves in San Diego...it's usually all about the surfers...but not always. Bioengineers are catching calcium waves in the brain cells of rats in order to figure out how the brain works...and maybe get a better idea of what causes Alzheimer's Disease.
Chris MacDonald, a bioengineering PhD student at the Jacobs School, is the guy in the photos above, and one of the first authors on a new paper in the journal ASN Neuro. The researchers describe the calcium waves they caught in the brain cells from rats that were exposted to the infamous amaloid beta peptides (a possible cause of Alzheimer's Disease). Below are related videos. Chris is in the lab of bioengineering professor Gabriel Silva.

I just put up the press release on the Jacobs School site...it is also up on the Bioengineering news site, and it will make its way up on the Institute of Engineering in Medicine site and the UC San Diego news site. The story is also up on EurekAlert.

By tracking calcium waves in networks of brain cells, researchers can see changes in membrane voltage, which offers insights into how neurons and other brains cells, including astrocytes, communicate. A better understanding of how the brain works from this bottom-up perspective could lead researchers closer to answering some of the deepest questions in neuroscience. Calcium imaging is emerging as the primary method for interrogating the activity of cellular neural networks, explained Silva, whose Cellular Neural Engineering laboratory focuses, in part, on how information flows through networks of brain cells. According to Silva, answering some of the deepest questions in neuroscience—like What are the origins of creativity, logical reasoning, consciousness and emotions?—will require a better understanding of how information is processed by functional networks in the brains of humans and other species.
“We are just getting to the point where the math and engineering methods are starting to be developed to allow one to study brain networks at the scale of individual cells,” said Silva. His lab collaborates with Henry Abarbanel’s group in the Department of Physics at UC San Diego on mathematical modeling of neurophysiological systems and computational neuroscience.
In the ASN NEURO paper, the researchers used calcium imaging to study a purified astrocyte network. Meanwhile, novel complementary techniques, including “two photon optical microscopy” are raising the possibility of experimental tools capable of testing and validating new theories about how the brain functions from the perspective of cellular networks. This technology could also help researchers uncover how individual brain cells behave as signals propagate through a given network. The Silva lab collaborates with Anna Devor’s Neurovascular Imaging Laboratory in the Department of Neuroscience at UC San Diego on experimental cellular imaging and neurophysiology.
Today’s fMRI (functional magnetic resonance imaging) tools are useful for studying the brain, but their spatial resolution is far too course to provide insights at the cellular level. “With fMRI, you have no information on what is happening at the individual circuit and network level,” said Silva. With technologies such as two photon optical microscopy, researchers are aiming to uncover how the brain works in much finer detail.
Mapping Brain Networks is Just the Start
While mapping the activity of cell networks is “a fantastically interesting problem” according to Silva, it is just the beginning. A more difficult problem involves determining how the brain uses that information. “Pushing the envelope of understanding for these types of problems requires breakthroughs in engineering, math and physics. That is the interesting part for us,” said Silva.
###
“Amyloid-β directly induces spontaneous calcium transients, delayed intercellular calcium waves, and gliosis in rat cortical astrocytes” by Siu-Kei Chow 1*, Diana Yu 1*, Christopher L. MacDonald 1*, Marius Buibas 1, and Gabriel A. Silva 1,2,3 at1 Department of Bioengineering,2 Department of Ophthalmology,3 Neurosciences Program, University of California, San Diego*These authors contributed equally to this work
This work was supported by funds from the NINDS (National Institute of Neurological Disorders and Stroke) at the NIH (National Institutes of Health)
Posted by Daniel at 11:03 AM